This year marked a special milestone for three of our teammates, who celebrated 15 years with Trek Travel! Back when these three initially started with us, George W. Bush was still president, YouTube had recently been founded, American Idol was a top TV show, and Lance Armstrong was winning the Tour de France. Since then, things have changed quite a bit, and we are honored that these three incredible humans decided to grow and change with us. 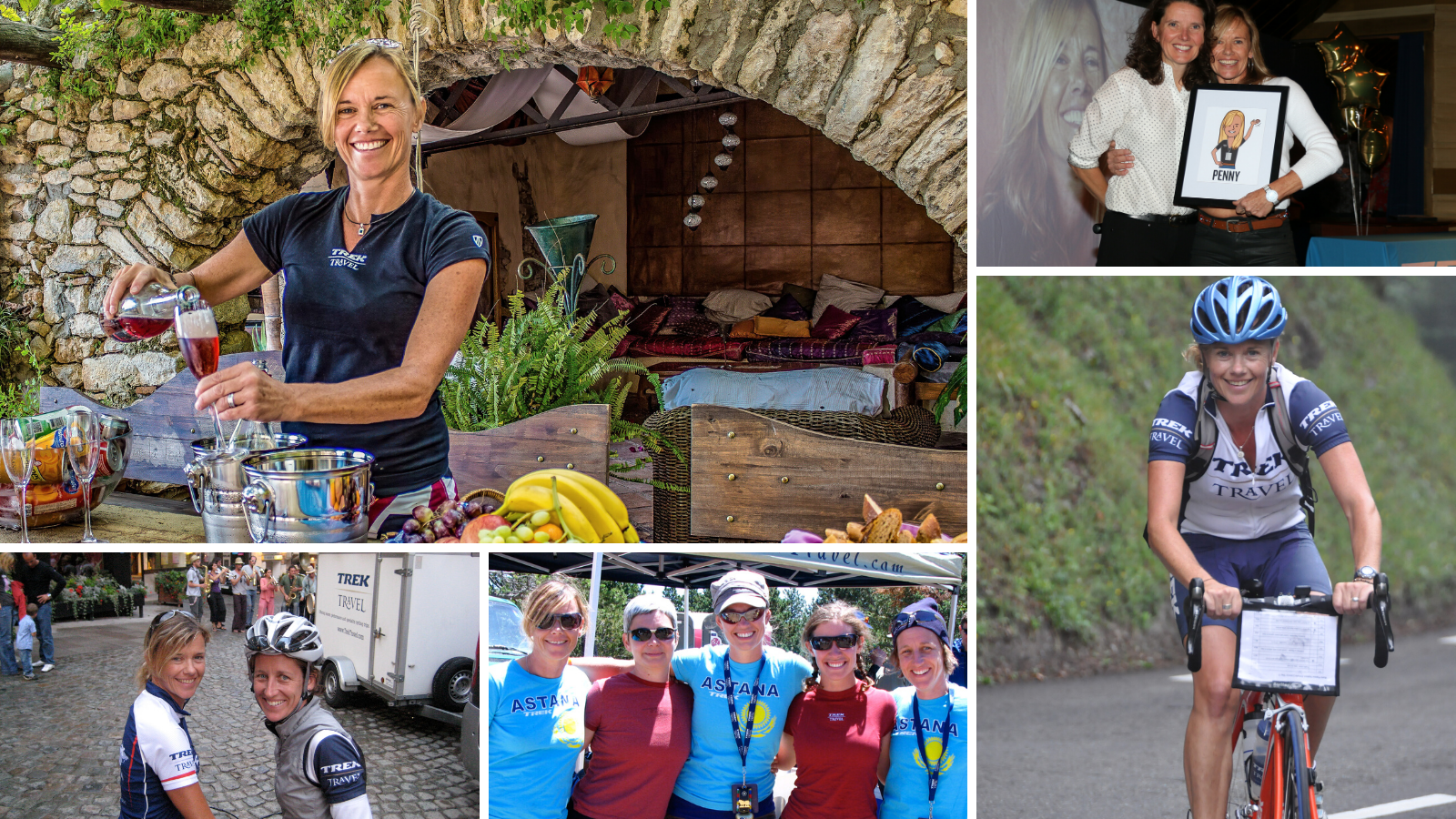 In her life before Trek Travel, Penny worked as a Jim Beam and Jose Cuervo promoter, a mountaineering and river rafting instructor, and even a cruise ship fitness instructor. Penny actually guided with Tania (Trek Travel’s President) in the late 90’s before Trek Travel was even born. Together, they ran 10-day Tuscany camping trips, where they were required to cook breakfast, lunch, and dinner for guests and slept in a trailer. In 2005, Penny officially joined Tania once again at Trek Travel and has been with us ever since. Today, Penny lives in Spain, where she continues to guide trips and work as a trip designer. Most notably, Penny is responsible for our incredible Tour de France experiences.

In her words, “The race has a life, personality and magic of its own that can only be felt up close and personal. A great hotel is nice to stay at, gourmet meals are a pleasure to eat, BUT riding and sweating up a famous Tour climb ahead of the peloton—your legs begging you to stop— and feeling the elation of making it to the top is where it’s at. A short while later, while in the comfort of the VIP zone at the finish line, you’ll watch the pro’s do the exact same thing, sweat and pain in their eyes. Be warned, it is addictive!”

Over the years, Penny has touched the lives of so many guests and co-guides with her warm personality. Our guide, Marquette, says about Penny, “Trek Travel has a few very special treasures, and Penny Gatward is one of them. Penny is a stop-you-in-your-tracks, ton of fun, beast on a bike type of girl who takes you for a ride whenever you are with her. She’s fierce, as a guide, trip designer, and most importantly as a friend and a mom. Penny is one of those rare people you’ll meet who never loses site of what’s important in life. She is truly genuine. I can honestly say, I’m always looking forward to the time we spend together and always leave a little bit happier.”

While many of our guests have not met Penny, they have still experienced her while traveling with us in Europe, as she has likely designed their trip. If you are lucky enough to have Penny as your guide on a Trek Travel trip, be prepared to: 1) have a strong drink in hand; 2) laugh a lot 3) rely on her stability and support to freely enjoy exploring a new country and having an experience of a lifetime. 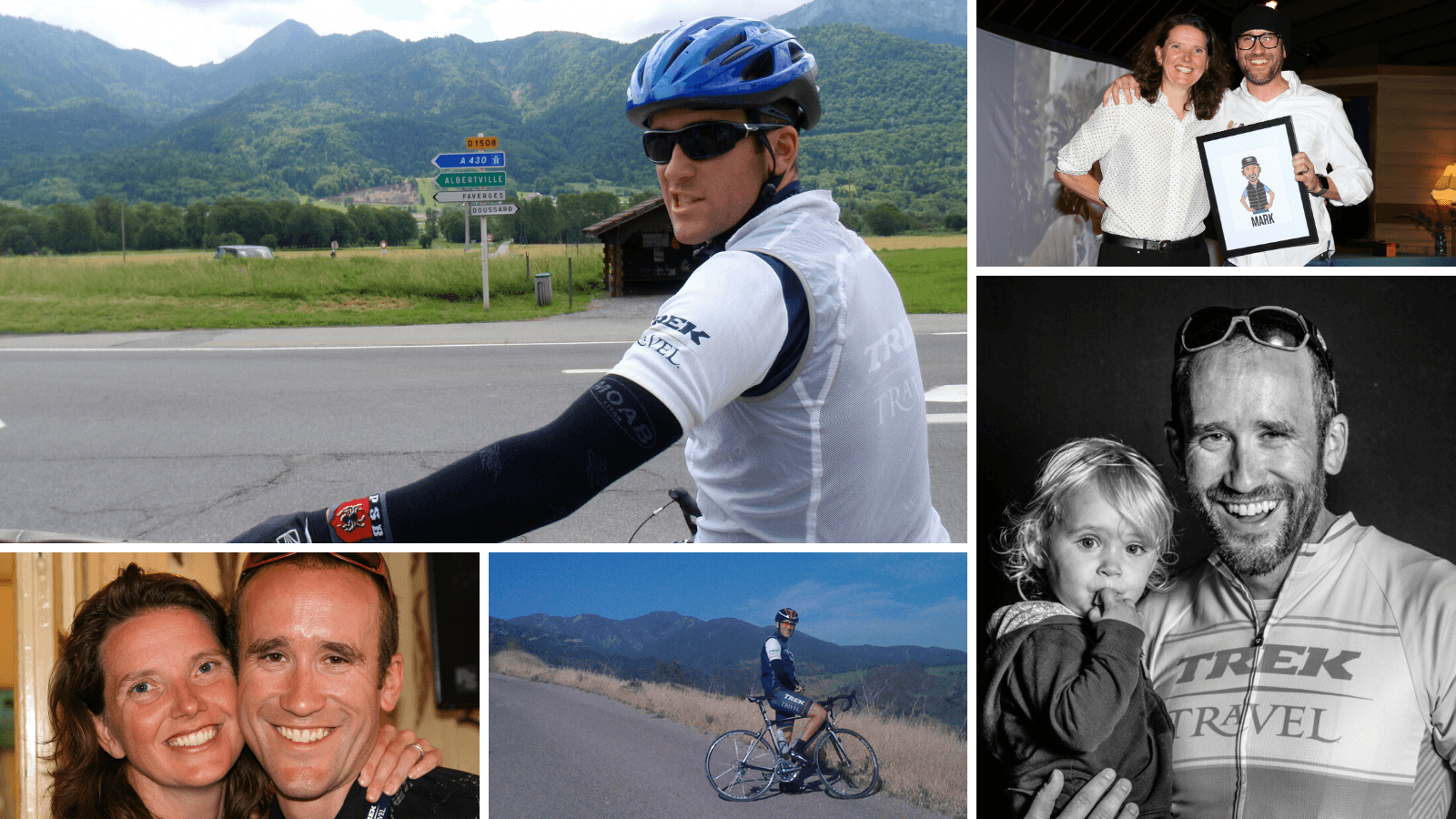 Mark has always loved bicycles, since he was a kid riding a repainted red Huffy on trails by his house in Wisconsin. When the opportunity came up to supplement his “skiing problem” in Jackson Hole, WY with a summer guiding job, he jumped at it. That was over 15 years ago, and he is still having a blast at Trek Travel today. In his time, he’s seen a lot of change and has held a lot of roles, from guiding and logistics to trip design and managing marketing to his latest position building and directing our new technology department. To say he’s grown with the company would be an understatement.

Mark says, “Some of my best memories over the years are from guiding at the Tour de France with all the crazy fans and our annual company guide reunions. We have a pretty amazing company culture where even when we haven’t seen people for years, when we get together, it’s like we haven’t lost a step in the relationship.

I think the biggest change I’ve seen in my time here is the size of the business in terms of people, how many more countries we travel to, and the technology we use in the office and on trips. We have a much larger staff and guide department all over the globe, and who would have thought that our road bikes would have disc brakes and electronic shifting, not to mention the fact we can now book people online 24-hours a day. But the core sense of family and hard work still remains.”

Mark has truly been instrumental in both the guide department and the office. He is always learning and looking for ways to improve. His co-guide, Hershy, says, “Mark is the quiet thinker in the room. He is always listening and watching what is going on around him. And he is always analyzing what we are doing well, and what we can do better. Today Mark Thomsen is an integral part of Trek Travel.

In the spring of 2009, I was guiding with him for the first time. We picked up our group of cyclists, along with three tandems and made our way to the wine country outside of Santa Barbara. Mark’s exceptional planning helped this trip to begin on a high note.

By Wednesday afternoon, we were making our way to Santa Barbara for the last two nights of the trip. Upon entering the city, the sky was dark, the sun was blackened from smoke, and ash was falling like snow in winter on the van. Helicopters were flying frantically overhead; we had entered the Jesusita Fire of 2009. Upon arriving to the hotel, we were informed we would have to evacuate.

What to do? We had bikes, a van, a trailer, guests, and luggage. Thankfully, I was working with Mark, who already had plan B in the works. Before the guests were barely aware, we were on our way to Ojai for the last two nights of the trip, which ended up a massive success. This was largely in part to Mark’s quick thinking and attention to detail, which he has brought to every role he has taken on at Trek Travel in his 15-year career.” 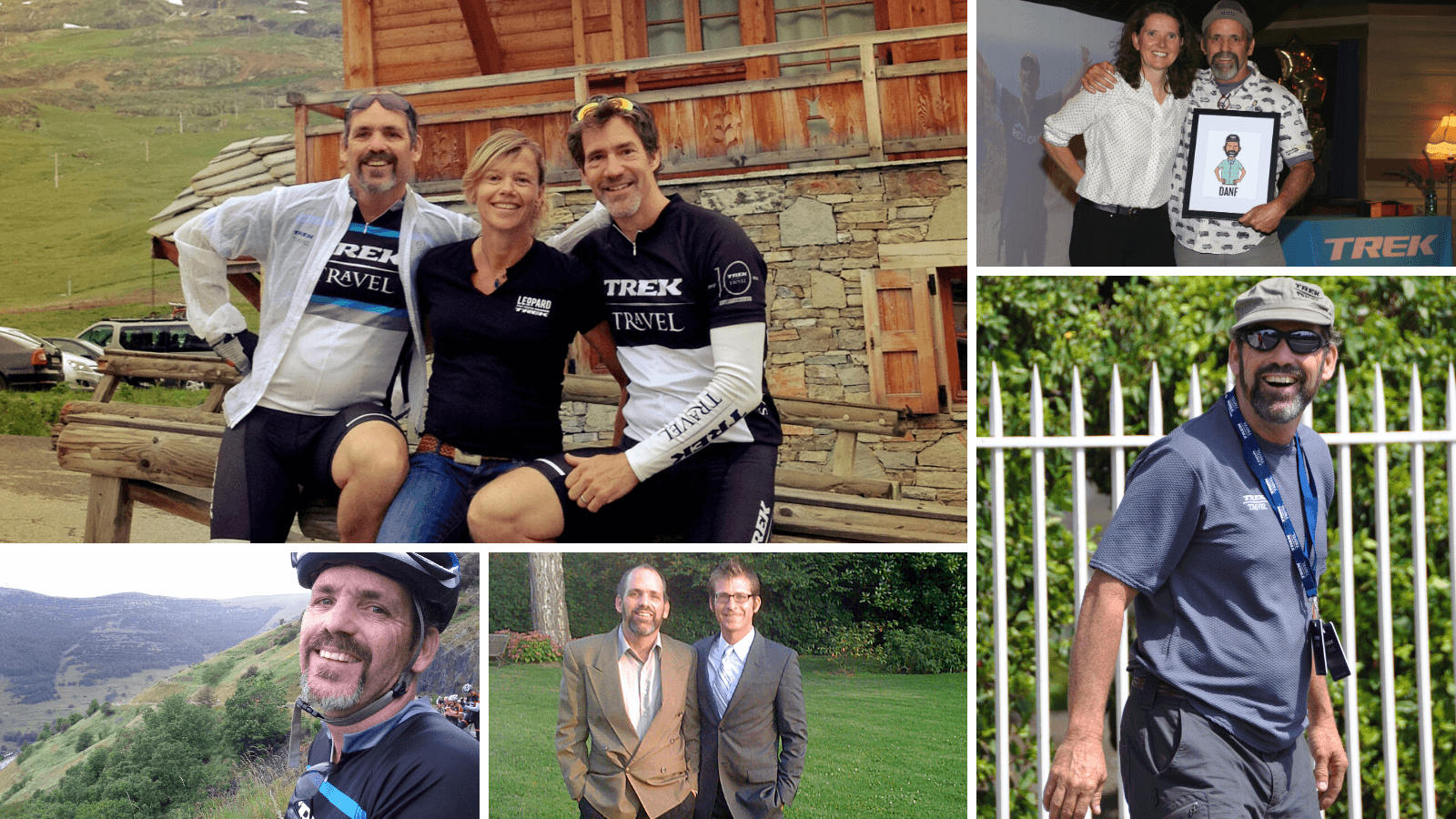 Danf’s background is in teaching foreign language, which made him a natural fit for traveling the world and communicating with a wide range of people. He currently lives in Durango, Colorado and has been guiding with us for over a decade.

One of our guides, Hershy, told us a little more about Danf, saying, “In late May of 2005, I was one of 10 guides gathered together to prepare for all three weeks of the Tour de France. We were in the city of Nijmegen, Netherlands, waiting for our debrief with the two guides who had spent the last month researching our trips. As they arrived, I saw one was a young guy and the other had the appearance of an absentminded professor. What struck me most about the meeting, was how the professor was extremely methodical when it came to folding the maps. I came to learn this was none other than Dan Fridegar, known as Danf.

Over the next few years, I had the opportunity to guide with Danf both in Europe and the USA. What I learned from Danf was this simple saying, “There are no mistakes.” It was his mantra, and it became our mantra, from setting up our Normandy trip to any time thereafter. Even when we would get lost, somehow later in the week, it became a key point of our preparation. Instead of having a mindset of perfection, he helped to foster a mindset of wonder. Through wonder and realizing there are no mistakes, we never made one. And we created amazing trips for our guests.

Danf loves to have real conversations with people. When I asked him how he learned French, he said that after his first trip to France, he could not communicate at all. So, upon returning to the USA, he decided to go back to school and major in French. Danf and his wife Suzy are amazing. They met while guiding together in California. They have guided together in South America and Europe. And they have raised their two kids with the ability to communicate. They have lived in France, Spain, Mexico, and Colorado (just to name a few places). Their entire family is fluent in English, French, and Spanish, and they can flow between the languages with ease and grace.

Danf has been with Trek Travel for over 15 years, and if you have the opportunity to be on one of his trips, come with an open mind and be ready to ride your bike, enjoy great meals, and learn that there are no mistakes.”