The route? Epic. The options? Incredible.

This year marks the 107th running of the Tour de France. As the Official Tour Operator of the Tour, we’ll bring you to the race’s best moments, including Nice Grand Depart, Col de la Madeleine, Col des Aravis, Col de la Loze, and so much more. From exclusive team Trek-Segafredo access to special VIP treatment to the world’s best bikes and guides, nobody does the Tour like we do. And nobody will have more fun than you will. Whether you want to watch the Grand Depart, mountain stages, or the finale, our Tour de France bike tours and cycling vacations will take you there. 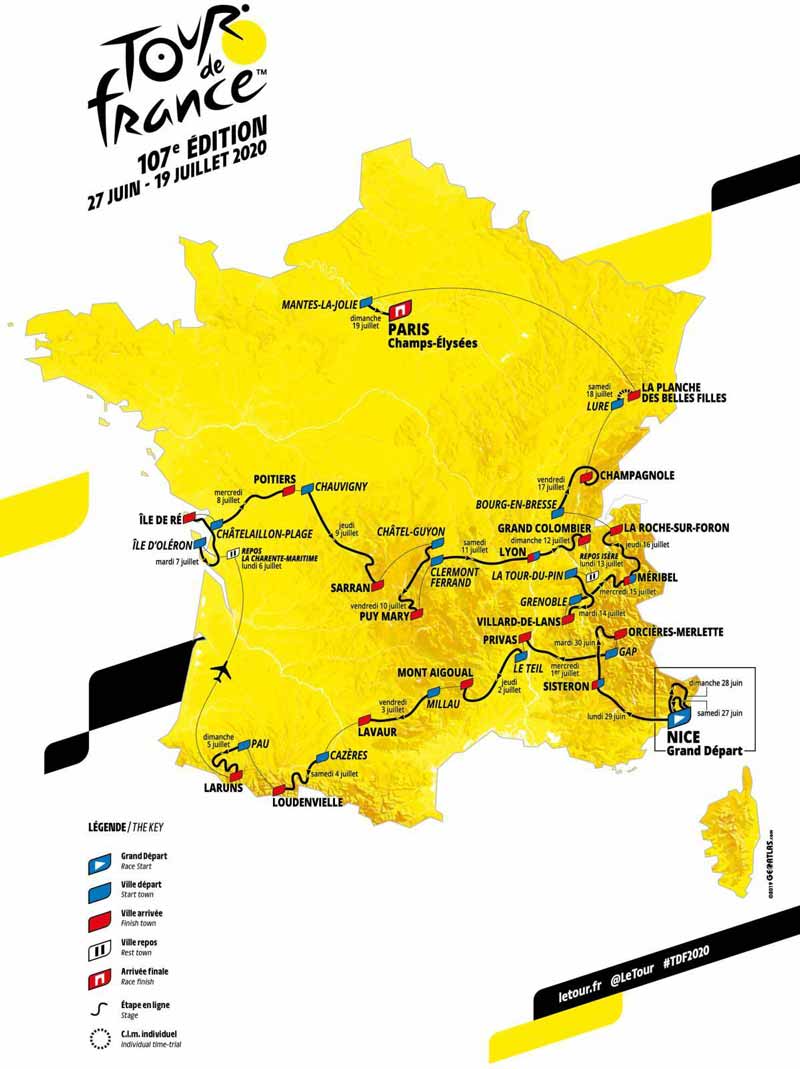 Immerse yourself in the drama, tradition, romance, elegance and natural beauty of the world’s greatest cycling race. We've scoped out the absolute best viewing spots on the entire route, and camped there for days to ensure you the best seats in the house. We'll take you to the major stage highlights and climbs of the tour while you ride the best bikes in the industry.

Join us at the prestigious Automobile Club de France for your exclusive Trek Travel gala viewing event. You’ll savor a celebratory glass of champagne and a buffet of elegant French hors d'oeuvres. The fanfare, excitement and energy of the 106th edition of the Tour de France is yours as you celebrate the glory of this epic race.

Experience the final stage on the cobbles of Paris

An epic ride designed to celebrate the challenge of some of the most famed Tour routes. This year's route covers Stage 2 of Le Tour, traveling a loop of 110 miles from and back to Nice. A breathtaking stage in the Alpes-Maritimes, the ride features two mountain passes before a climb up to Col d'Èze and some spectacular views of the Mediterranean Sea before crossing the finish line in Nice. As an Official Tour Operator for both the Etape du Tour and the Tour de France, we are proud to welcome you to "Team Trek Travel Etape" and to guarantee your place for 2020.

Prepare for Legendary. Ride the full Stage 2 of the Tour de France.

Trek Travel's Tour de France difference ensures an incredible cycling vacation watching the pro peloton make their way to Paris. Over three incredible weeks of racing, unrivaled access, and legendary Trek Travel service combine to give you an experience you can't get anywhere else.

Our race trip guides have the experience and mechanical skills necessary to keep you riding comfortably at your best in all conditions. They bring years of experience managing the trip logistics of pro race itineraries and stage viewings.

When it comes to bikes, we set the standard. Included in the price of your trip is the choice to ride one of our unprecedented premium quality Trek bicycles.

As an Official Tour Operator of the Tour de France, our guests will enjoy amazing behind-the-scenes access. Our participants may have the opportunity to:

We don’t want you to miss anything. After all, it’s all a part of being exposed to the races and the regions. All of the VIP race access, citizens’ ride entry fees (as applicable), and cultural events that are mentioned in your itinerary are covered in the cost of your trip. Race trip itineraries include live race viewings, sometimes including race-organized VIP stage start or finish access. Guests enjoy prime stage viewing locations complete with front row seating, catered lunches, live TV broadcasts, and pro rider appearances (whenever possible).

Daily rides will feature the best parts of the race course. Trek Travel is able to accommodate different rider levels. It’s your day, you decide. Always. We also have non-rider itineraries available on some trips. Please see the trip itinerary for specifics.

What is Single Occupancy?

Sometimes it’s more convenient and comfortable to have your own room while on vacation. We understand and that’s why we offer a Single Occupancy option. The additional price guarantees a private room all to yourself.

I lived a fantasy on this trip.

Everything about it -- from the organization, guides, hotel and restaurant selection, VIP treatment during the race, inside exposure to RSNT team, the au revoir cruise, and especially the unforgettable riding -- was absolutely first class! And the other guests. It is remarkable how quickly we gelled into a tight knit group, all because we shared a common passion.

Especially for the TdF where access and logistics are so critical to a wonderful experience.

The value you will receive in meals, lodging, equipment, support wagons, events, organization, world class service provided by world class guides will be more than twice what you will spend and will be hard to match anywhere. I am so grateful to all of you at Trek Travel for the privilege of going on this dream trip with the dream team guides that saying thank you feels inadequate.

This was the best vacation ever

We still talk about is all the time. Getting to see the race and racers up close, and getting to ride their routes was something I never thought possible. And having everything taken care of - all we had to do was show up. That was incredible.

The climbs were hors categorie, but the trip was also hors categorie. Without a doubt, the best day of cycling of my life was on this trip…Trek Travel absolutely nailed this trip.

My favorite part was getting treated like a VIP all the time.