Meet Adrian and Drew, owners of Agua Tibia surf school in Costa Rica. Sense their passion for the sport as you follow along on their journey of adventure, discovery and the search for big waves.

Tell us your story. What inspired you to start surfing?

Adrian: After school I would do my homework then swim in the river with friends. That’s all we did outside of school – homework and swim. Then one year after moving to Samara Beach in 1999 I tried surfing for the first time. The feeling of riding a board in the water was even more fun than just swimming in it. As the time passes and I am able to see many beautiful places in the world and get to know more great people, their culture and the beauty of each place, it brings me back to swimming in that river as a boy and catching my first wave.

Drew: I had been a skateboarder since I was 10 years old, and had my first surf experience when I was 20. It wasn’t that great, as a matter of fact I almost drowned two times. I went to the beach with a surfer friend of mine and he gave me his short board to learn on. The waves were over 6 feet that day (that means overhead surf). Of course he didn’t explain anything to me but I was eager to try so I paddled out and somehow made it there. I tried to catch some waves but it didn’t work. It was very intimidating to see that big, dark hole I was supposed to drop into. At this point I was exhausted, I couldn’t find my friend and it was getting dark so I decided to paddle in. A strong rip current pulled me. Knowing nothing of how to handle it at the time, I lost my board when a big wave crashed on me. I grew up swimming in rivers, so I am a decent swimmer. I swam to a surfer guy and asked for help. He told me to get on his board and we took a wave into shore.

The funny thing is that I did the same thing again. This was my second try. Same beach, same friend, same board, same waves, same current. This time was more intense. I couldn’t find someone to ask for help. Then all of a sudden an Argentinian lifeguard on shore saw my board drifting in without me. He picked it up and paddled out to get me. He saved me. I never got his name or saw him again, but he saved my life.

As you can imagine after these two experiences I decided that surfing was not for me. I was comfortable on the concrete with my wheels. Two years later I was doing social work in Nicaragua and my surfer friend calls me about this job at a hotel reception desk in Playa Guiones. When I got his call I had just started my trip and I was going to be out of the country for a month. I did a phone interview and they gave me the time to come back and take the job. That was my first time in Nosara.

At that time it was basically impossible to skate around Nosara. I remember there was one mini half pipe where I would go. Everyone was into surfing here and I had my surfing experience already. I didn’t get into the water until six months after I moved here. Since I couldn’t skate I started to get interested in surfing again. But now I had a bad experience so before I went for it I asked a couple of the new surfer friends. They just said go for it, on a bigger board. And I thought that was enough to go for it again. I borrowed a bigger board (7’3”) and started to paddle out. Nobody told me I could do white water so I went straight out to the green waves. It took me about three months to be able to get out there and then I finally made it. I was out there on a big day. The moment I look around trying to find a familiar face I could only see three of the best surfers in town out there with me. And then I thought to myself, “What am I doing here?” Now I knew a little more about safety and I just focused on not losing my board. I waited for an hour to find a smaller wave to catch. It didn’t happen. I started to paddle for what I thought was a good one and the wave just kept building under my board. All I could think was, “If I don’t make it, I die.” I made it. I stood up, went down the line and all the way into shore. I will never forget that wave. After that I did some downhill long boarding but having the power of the ocean pushing at that speed was and still is the best feeling there is. That first wave did it. That was my inspiration to surf. 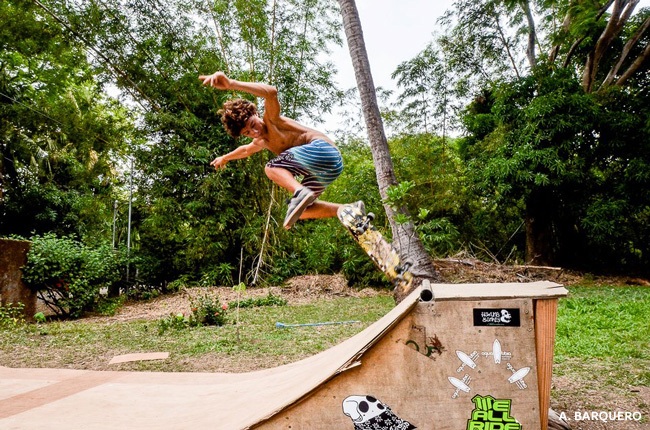 What inspired you to open your own surf school?

Adrian: After discovering that surfing was the main reason why I was going to stay here in Nosara I decided to start focusing more on improving my English, my surfing skills, and also trying to get a deeper connection with the ocean and its constant change. In 2010 I got a job at my friend’s surf school and I began as the guy who would clean the boards and put them inside. Soon I was at the front desk making reservations for the surf lessons and three months later I found myself teaching my first lesson. Teaching others reminded me of the first time I caught a wave. At that point I knew I wanted to own my own surf school. I knew I wanted to bring smiles and happiness to people, and maybe even change their way of seeing life after learning how to surf.

Drew: After working for the hotel for a year, they let me go. I had been surfing for six months and made a lot of new friends. Two of my new friends had a surf school and they hired me to be their receptionist. One day we had so many students they needed me to help them teach. So there I was, a six-month-old surfer teaching beginners. I started to notice that everything I was teaching also helped me improve my own surfing and at the same time I enjoyed teaching so much. I met Adrian there and we worked together for over two seasons. We were basically managing our friends surf school as they were getting a bit detached from it. We started talking about opening our own place and that’s how we started to sketch what Agua Tibia is now. 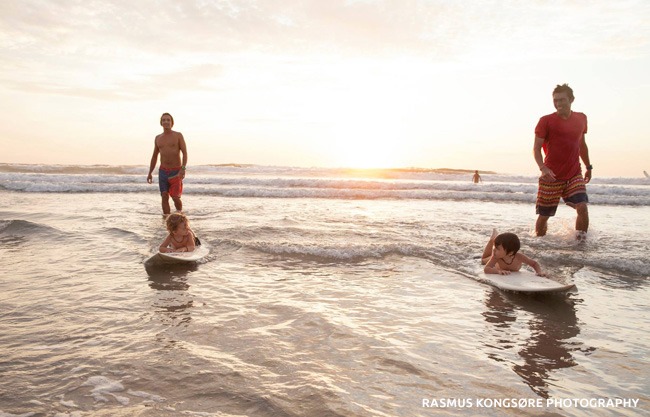 Tell us about the best wave you’ve ever caught.

Adrian: How could I forget that moment. It was at Playa Pavones in southern Costa Rica and I was on a fabulous trip with my friends. We got there two days before the swell hit and it was kind of small but we knew it was going to get better as the day went on. Once we were in the water it was even better than we thought. We woke really early on Thursday morning at 4:50AM, I made coffee and breakfast and after a good meal we headed to the water. As soon as we saw the first wave breaking we knew that the long drive (10 hours) was so worth it. I have to mention that this wave only breaks to the left because it’s a point break and also is the second longest wave of the world. Truly, this wave has been my best wave ever because it was super long, big and clean. It was what we call a perfect wave, so I will never forget this experience. We got to surf two of the longest and best waves of Costa Rica and I had the longest wave of my surf lifetime so far.

Drew: One day I was long boarding and I was around 50ft further out than the rest of the line up and I saw this massive wave building 100ft further out than where I was. So I found myself thinking, “Should I paddle out to it and go through or should I paddle in to the rest of the line up to skip it?” Two seconds later I decided to paddle out to it and try to pass it. I got to it and I was perfectly positioned. I went for it. So scary. So much adrenaline. So much fun. That’s a wave I will always remember. Makes me smile just to think of it. 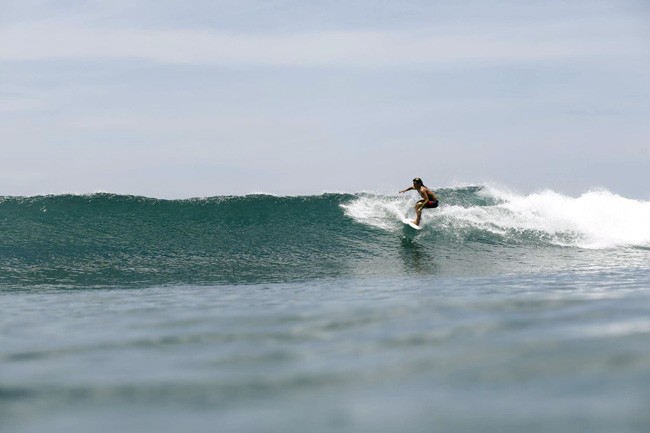 What excites you most about Costa Rica?

Adrian: I love our culture. The people are so welcoming, warm and open. When you walk down the street you always hear everyone saying “Pura Vida” which means “Pure Life” in English. It really is a pure lifestyle here in the jungle, close to nature. We are conservative with our water, conscious of where our trash is going, always keeping compost in our yard, eating healthy, helping the animals and spending as much time as we can outdoors.

Drew: Our people. The Pura Vida. You know one is truly Tico when you feel at home. Of course there are all kinds of people here but real Costa Ricans are welcoming and warm, honest, respectful, loving, caring and always willing to help. I see all this slowly dying in the new generations but we live like that here. We fight to conserve it. Pura Vida. 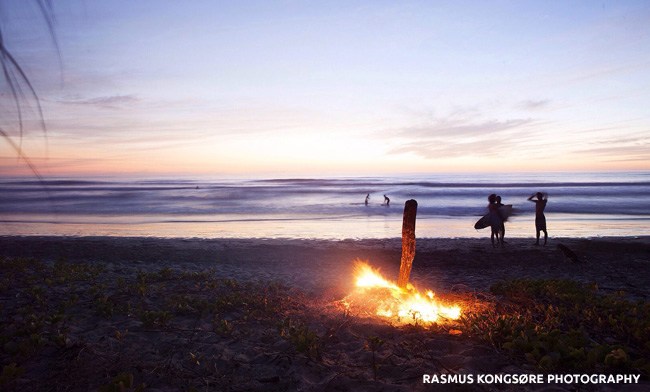 Surf with Adrian and Drew in Costa Rica!