I write on culinary topics for many publications, and as the door closes on 2015, it is time for annual reflection on my standout restaurant meals from the past 12 months. This is a tradition I started with my “10 Most Memorable Restaurant Meals of 2011,” and continued in 2012, in 2013 and 2014. Those years are still worth checking out, as most, if not all, of the eateries are still very relevant to travelers. As part of this year end recap series I also wrote yesterday about the 10 Best Hotels of 2015.

One reason my lists are especially useful for travelers is because, unlike most publications, I don’t confuse “new” with good. If I ate someplace this year for the fifth time, that’s because the place is great (like St. Elmo in Indianapolis). If it has been open for a hundred years but I just ate there for the first time and loved it, you will find it here (Denver’s Buckhorn Exchange). Also, my picks tend to be in actual travel destinations some of you will be visiting for business or vacation anyway, so unlike most food magazines, my choices are not all in Brooklyn or the Hudson Valley. Hype or trendiness doesn’t make a restaurant better or worse – what matters to me is the food.

As the Great American Bites restaurant columnist for USAToday, the nation’s largest newspaper, I scour the country looking for the best regional and standout foods in every corner of the U.S. My other food media outlets take me all over the world, and as a result I spend a lot of time in restaurants. A rough calculus would suggest I eat out at least 250 times a year. Unfortunately, many of these meals are forgettable, or merely “fine.” The following are the coveted exceptions, my ten very best taste memories of 2015. 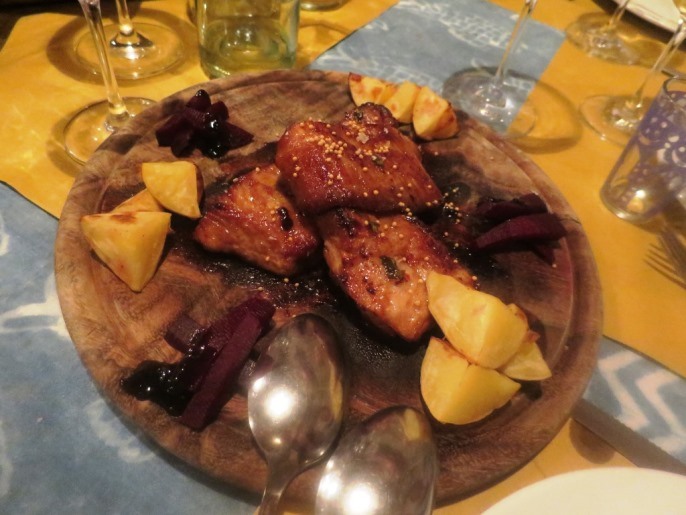 Meal of the Year – Assirto, Moneglia, Italy: This one is a bit of an exception to my rule above, because it is off the beaten path and in a seaside town very few American tourists are likely to find themselves. But I included it here because it was simply the most unbelievable, fantastic and memorable meal of my entire year, with one of the best dishes I have ever tasted, and well worth a several hour long trip from almost anywhere in the region, which basically means Rome, Florence, Milan, Genoa, Bologna, Turin or even over the border in Nice. Moneglia is a small beach town on the Ligurian Coast just north of the much more visited Cinque Terre, for which it serves as a lower cost bedroom community, a short train ride away. I have found that the best restaurants are run by passionate visionaries, and Luca, the omnipresent proprietor, fits the bill. He has caused a bit of local controversy, though no international publication I have seen has ever taken note of the place, through his researched focus on historical Mediterranean cuisine. For this he goes way back to the region’s roots, and thus puts a big emphasis on things like salt cod that was received in trade with Portugal and Scandinavia, as well as the famous anchovies swimming just outside his door, a geographically protected IGP product.

But perhaps his boldest move is his insistence that the famed cured hams of Spain, jamon serrano, pata negra and jamon Iberico de bellota, are more authentically Mediterranean than the locally beloved Italian hams, prosciutto di Parma or di San Danielle, which he calls “mountain hams.” His belief that Spain’s rival hams and pigs are tied more to the local geography and coastal climate than Italy’s is akin to being an outspoken Dallas Cowboys fan in Green Bay. But the result of all this is his signature dish, a sort of braised/grilled combo of the secreto cut of the finest acorn fed Spanish pigs. Secreto, as you might guess, means secret, and refers to a “butcher’s cut” in Spain, meaning cuts customers don’t know about that butchers love and keep to themselves, like hanger or flat iron steaks. Steven Raichlen is the world’s leading authority on cooked meat, and his BarbecueBible.com site calls secreto the “Best Kept Secret in Barbecue.” On a full grown pig it amounts to just a one and a quarter pound strip adjacent to the belly, where bacon comes from. Pork belly has become a very trendy dish because of its delicious fattiness, but imagine if you could turn the flavor and succulence of pork belly into a meatier steak, then source it from the finest pigs in the world, then cook it perfectly using a time consuming combination of styles that include a professional steam oven. The result would be what they serve at Assirto, which might be the best meat dish I have ever tasted.

I don’t usually put a lot of stock in sites like TripAdvisor, but since there is so little on this hole in the wall restaurant, that is where it has been covered the most, and a quick glance shows that it is numero uno in town, with near uniform 5-star ratings, and lots of them. Almost all fawning reviews detail the unexpected food that is hyper local and very different from preconceived notions of “Italian,” the friendly staff, the hands-on owner helping to choose dishes, the value, and Luca’s intimate knowledge of obscure Ligurian wines. All in all, this causal enoteca set in a historic building in a small alley is a winner on every front, but it is the pork the rocked my world, simply the best “other white meat” I have ever tasted, and as a barbecue nut, I have tasted a lot. As a visitor from Sweden wrote, “the grilled iberico, forever in our minds as the best meat we ever ate. Today in cold Sweden I still dream of this culinary experience and think that another visit to Liguria would be worth it just if we could come back to this jewel.” Amen. Assirto reminds me a lot of my visit to Massimo Bottura’s Osteria Francescana in Modena before Bottura became as much of a household foodie name as the top chef in Italy. Admittedly his restaurant was already acclaimed, but Assirto shares that same sense of discovering something really special and different, a more passionate, more historically informed take on Italian culinary tradition. Unforgettable.